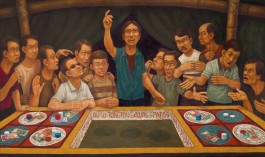 A witty parody of Leonardo da Vinci's The Last Supper, Mark Justiniani's Ultimo Cinco depicts a gang of gamblers eagerly awaiting the fall of a dice and the outcome of a bet. The central figure has cast the dice so high in the air that it is out of sight, and in so doing, he assumes a pose of benediction, seemingly Christ-like with his eyes averted to the sky. Most of the gathered look up at the direction of his hands, save for a sly bestacled rogue who pinches a 500 peso bill from the bettor's table, unknown to his peers. The gesture of surprise that is registered at da Vinci's Last Supper (as a result of Christ's announcement of his impending betrayal) is appropriated by Justiniani as a gesture of anticipation, humorously transposed here in another context. Justiniani painted this canvas for his first one-man show, Kasimanwa in 1993 at the Hiraya Gallery in Manila. The work forms part of a series that describes episodes of the townsfolk (kasimanwa) of Victorias, Negros Occidental, in visual anecdotes of everyday life. 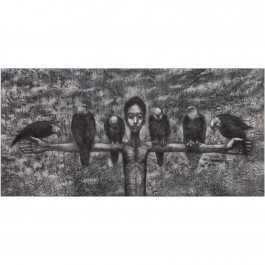 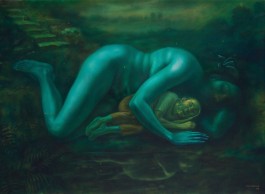 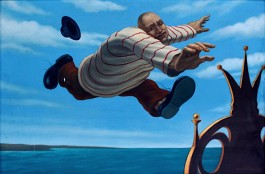 LEAP (From the Book “The Chair King”) 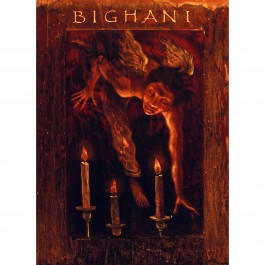 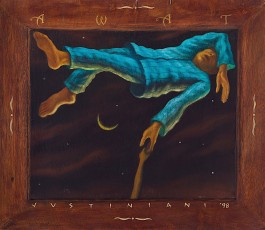