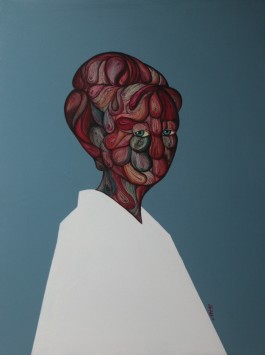 Using the genre of portraiture, Julius Redillas’ works often revolves around the concept of identity; usually stripping them off of it without removing its familiarity. Redillas uses ready-made images and documents as a starting point in creating his works and recreates these familiar and common imagery using traditional media such as drawing, painting and moving image. In the words of the artist: "I mimic documented subjects. I initially played with the idea of documenting documented things using references such as books, periodicals, torn pages from magazines, and my favorite, Googled images. Everywhere, we see things getting fixed and people being saved. I emphasize a world where everyone wants to be involved in the whole process, and its manipulated realism and truths. This is where the phantasmagoric theme in my works comes in with a consciousness, that is, to skin the subject devoid of any precursory judgment. I see my works as a collective depiction of a society that is voyeuristic and exploitative. This obsession of representing truth as I see it then defying it with a tinge of playfulness guides my work. Like an inquisitive stalker studying its prey, I scrutinize my subjects, get familiar and intimate with them, but never involved—very much like a god. I try not to cross that line of involvement as I fossilize a subject into an image embellished with an outré panache or two but still bereft of any pompous, extravagant histrionics. With the fast-paced technological and politico-economic strata as playground, I explore the deconstruction of images with various cosmetic abscesses, playing with archetypes and resisting them altogether. I assume the role of a rebel god tampering predesigned creatures with imperfections to give breath to new ones. The new creature becomes one with the stamped imperfections in the manner of wabi-sabi. These alterations are connubial with the subject’s beauty, both coexisting like pacified concubines. There is no sign of burden as the now homologous subject comfortably sits in its new skin exuding a shared ancestry between seemingly disconnected objects. It becomes non-celebrating but calm, resilient, and almost evasive. There is that air of obliteration, of nihility. It is just a blank slate waiting to be tarnished-embellished in its viewers’ imaginations again and again. To see that happening excites and satisfies me."
Currently based in Angeles City, Julius Redilas has a Bachelor of Fine Arts degree Major in Painting, from the Far Eastern University Institute of Architecture & Fine Arts, and has exhibited extensively in the Philippines and abroad. 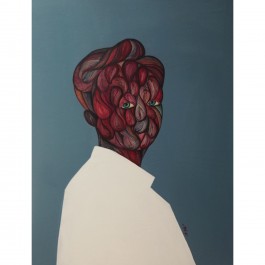