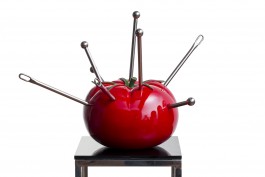 A janitor, a bartender, a finalist at a noontime game show, John Paul “JP” Duray wore many hats before realizing his true calling as an artist, hats that helped mold him into who he is today and what he could become.
“I finished a nursing assistant and caregiver course in Olongapo City. When I was a young boy, I had this vision that someday I would be a successful man and contribute something to society. What I really wanted to do was design furniture but money was hard then,” says 28-year-old JP. In 2013, he became interested in art and started doing sketches and paintings, from portraits to surreal masterpieces, until he dreamed of Banana Man. “In June 2015, I dreamed of a boy who had a banana for a head submerged in water carrying a heart. When I woke up, I drew this boy and called him Banana Man. I realized I wanted to make him into a sculpture, that making sculptures is what I wanted to do. Banana Man opened a lot of doors for me,” he says. JP became obsessed with creating Banana Man. He studied the perfect measurements, the right proportions, and the correct material and paints to use to make his dream realistic. In 2016, Banana Man was finished, looking exactly the way it was in his dream.
For Art in the Park 2016, JP created 12 pairs of the woman version of Banana Man, Bono and Olga. His work was chosen as third out of the six outstanding pieces. In 2017, he was sold out in the first hour of Art in the Park with Billy, a boy with a heart for a head, carrying an ampalaya in its bag, a bitter heart, and Rocky, the mad lover. In between, he also focused on his new baby, Boop Boop, an 18-inch toddler with a big mouth on its stomach, carrying a giant lollipop.
After all those art pieces and recognitions, JP wanted more. So he decided to go to Art Basel in Hong Kong with Banana Man. He handed out his calling cards to every gallery booth he saw until he was invited at the Scope Art Fair in Miami where he presented Emerie, a comfortable sculptural chair that you could sit on. “I love sowing. When I was young, my mom and I would sow and repair clothes, its collars, sleeves, or buttons. I am always carrying a mini sewing kit with me in case someone needs it. I created Emerie to represent me, my story, how each fabric and thread was sown together and made me the person I am today. For me, it means I’ve reached what I really wanted to do with my life and how these significant events that I went through made me who I am today.” 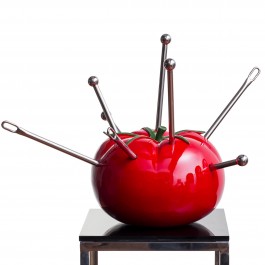 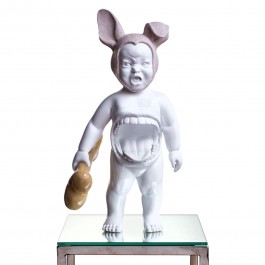 Boop Boop (Year of the Dog)