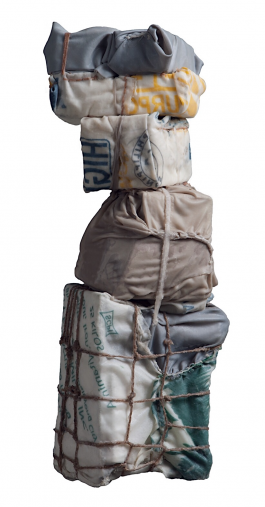 The cryptic and often enchantingly private canvases of Jose Santos III are beguiling with their sense of clean craftsmanship and mysterious iconography. While they are easily described as having a sort of surrealist bent, the artist has asserted that his subjects do not come from dreams nor from the promptings of the subconscious. In fact, the artist mines the images from his everyday reality, which he re-presents in a variety of slants, codings and symbols that may very well describe his private musings and reflections of his immediate surroundings and the dynamics of his family life. Born in Pasig to an artistically inclined family (his father is a respected graphic artist and his sister an accomplished ballerina), Santos' artistic career began when he was recruited by fellow classmates from the University of the Philippines College of Fine Arts to join the Antipolo-based artist group Salingpusa in the 1990's. It was with his stint with Salingpusa that his artistic language was honed and in the 2000s he developed a series and a style that involved clean lines, terse but elegant compositions and a type of figuration that was more mathematical in its structure than natural. For these works, he was awarded the CCP13 Artist Award in 2000. Up until 2004, Santos pursued an academic teaching career at the College of Fine Arts, but went on full time as artist at a critical juncture. Shortly thereafter, in exhibitions in Singapore and Hong Kong, Santos developed a new approach in his work that involved more graphic elements and a play between flatness, surface design and tonal depictions of mass. Highlight of this period is his large-scale mural Lifeline that is prominently hung in the lobby of the St Lukes Medical Center-Global, BGC, Manila. This work describes the various states of diagnostic and curative functions of medicine on the body in a combination of anatomical, figurative and illustrative elements. Several of his works in the Pinto Art Museum collection showcase the artist's “Filipiniana” phase, where he portrays 19th century to early 20th century Filipino types and characters that were inspired by his discovery of his grandmother's scrapbooks that documented this era.
His recent projects, which began around 2008, eliminated the use of the human figure in favor of depicting (and incorporating) ordinary and found objects such as canvas bags, packaging material and used gloves. Santos explores how such objects, considered as our leavings and traces, are poetically descriptive of how we move through the world, use the environment and eliminate what is consumed or utilized in a sort of cycle. The artist assessed the stuff that he himself was consuming and discarding (such as gloves for painting) and decided to reuse these as well as other items in his studio in a meditation of the process of creative consumption.

Santos lives and works in Pasig City. His work has been prominently featured in many exhibitions in the Philippines and, including a major presentation at ArtBasel Hong Kong in 2012. His work has also been well received in international auctions of contemporary art in Christie's and other institutions. 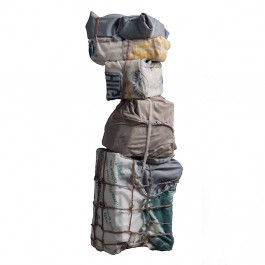 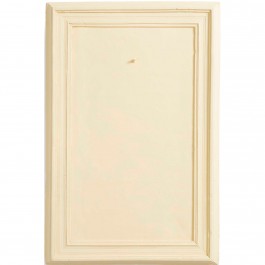 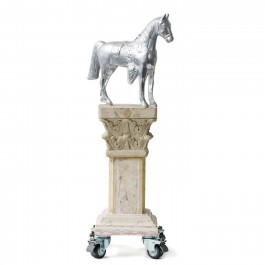 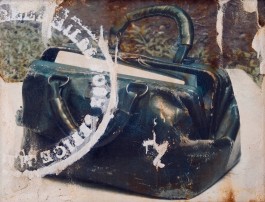 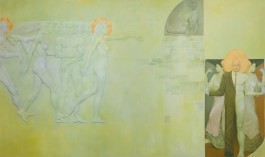 There’s A Street On The Wall 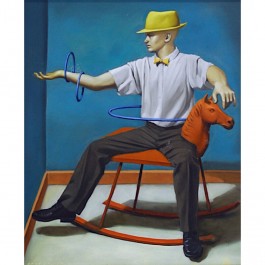 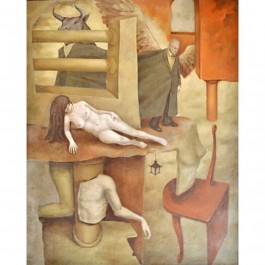 Naked Woman and a Clothed Bull