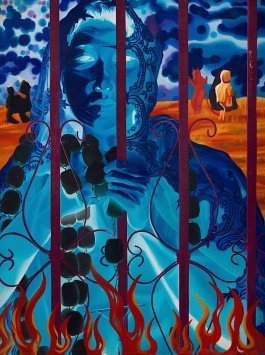 In the 1990s the artist Geraldine Javier used color-photo negatives as subject for her paintings. The surprising contrasts of unfamiliar hues on commonplace subjects were the artist's signature coup for her works. This particular painting, however, possesses a peculiar grist, as it seems to poke fun on the rabid kind of Catholicism (a relic of Spanish colonial culture) that was extreme in its observance of rites and rituals, and a fascination for divine retribution and eternal damnation as tools for emotional blackmail and social herding. Painted here, in atypical blue, is a veiled woman who is bedecked in an unusually large rosary. Her hand grasps the bar of a gate, whose fiery red hue is matched by the presence of stylized flames at the bottom. In the background, under a psychedelic sky are silhouettes of what appears as playful demons and other creatures. What does the painting imply? Is the artist portraying an ironic portrait of a believer of hell-and-brimstone faith actually suffers the cage of her own unkind piety? That such preoccupations with hell actually leads one to live in that kind of life? Holy on Sundays is a bickering response to those who self-righteousness runs counter to the spirit of Christianity in its emphasis on kindness and compassion. 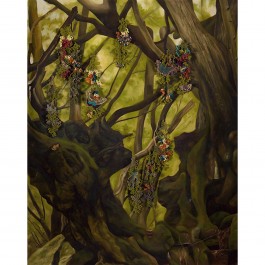 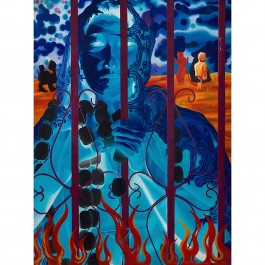