Born in Tarlac, the artist has nevertheless spent his entire life in Antipolo, a hillside pilgrimage town in the east that overlooks the sprawl of metropolitan Manila. The fact of his location and environment has been part and parcel of the artist's life and consequently his art. A founder of the Antipolo-based artist group Salingpusa, Montemayor has been active in the local community of artists, first as a collaborator for projects and works among local painters and peers and later as mentor to a younger group of artists who would also achieve renown for their own work. Another more important aspect of the influence of the painter's location and abode is its pervasive influence on his work. Montemayor took the image of the city seen from the vantage point of Antipolo and produced his iconic “Bayan” series that was critical and curious of the steady state of urbanization that took place in key cities in the Philippines in the 1990's. The artist is a keen observer of life in the “macro” scale and goes into details of how people interact in the public and private spaces, often even stripping away exterior walls to reveal the goings-on of inhabitants and denizens in and around domiciles, places of work and plazas. The painter would persist working in this series until the mid-2000's, even to a point where he represents the city as occupying a whole planet, a global village. His canvases often feature the artist's active brushwork, defined by a combination of long and short strokes of paint, often in strong hues of warm reds. However towards the beginning of 2010 the artist has moved from  a brighter palette to a more monochromatic, yet starker black-and-white one. His subject has also changed from depictions of a town in still-life into evocations of action in games and competitions, such as triathlons or races. Yet his frenetic brushwork prevails, this time in fluid acrylic, and in textural surfaces that show the fury of action and the intensity of effort.

He received the prestigious 13 Artists Award from the Cultural Center of the Philippines in 1994 and his work can be found in the Singapore Art Museum and the Pinto Art Museum collections. 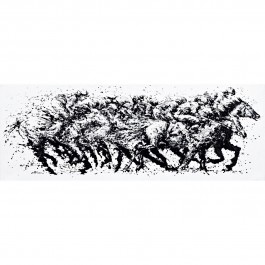