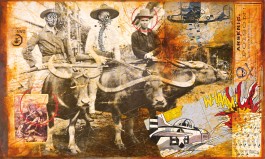 Described as a “polymath” by art collector Joven Cuanang, Leaño's oeuvre extends beyond the practice of painting to product and environment projects to architectural design and construction – all from an autodidact's experience. He is best known as the designer of the Pinto Art Museum as well as key consultant to the development of the Silangan Gardens where the museum is located. In the 1990s, Leano was known as a visionary painter of apocalyptic canvases as well and co-founder and erstwhile leader of the artist group Salingpusa.  As a painter Leano's work spans a range of genres and styles – from the figurative to the abstract, extending to non-objective work. His first series were grim portrayals of modern life as gladiatorial contests and adversarial games where men in business suits pit themselves in arenas where monsters confront them in cruel battles. Often Leano would take the streets and avenues as war fronts and his canvases would convey the artist's comments on the perverse competitiveness of the corporate-driven engines of modern urban life.
His Mall series in the mid-1990s saw the artist working with acrylic sheets and other found materials to prophesy how the emergent consumer centers would eventually take over the consciousness of the public. Immediately preceding this shift, Leano was already working on his Land Art projects, designing and building structural improvements and features to the Silangan Gardens, where he took up a long artist residency. In the late 90s, while in residence still at the Gardens, Leano created a series of canvases using 19th century Philippine postcards and photographs that were aligned with the centennial celebrations of the declaration of the country's independence. These works described a kind of bitter nostalgia, one that was wary of the transience of time and the pictorial reality of forgetfulness where images of the past become beautiful remnants and vestiges and not only as documents of history. He briefly withdrew from the active art scene but not after representing the country in various international conferences and biennials in Brisbane, Yogyakarta, Osaka and Fukuoka.
His work from the 2001 to the present are heavily informed by his projects in building design and construction, starting from the Pinto Art Gallery in 2000 to his chief work, The Pinto Art Museum, a decade later. He began to use industrial materials in his work, including cosmic meditations on canvas with elastomeric cement. At present, Leano continues to oversee and design one-of-a-kind structures – both domicile and commercial – in different parts of the country.

He received the prestigious 13 Artists Award from the Cultural Center of the Philippines in 1994 and his work can be found in the Singapore Art Museum, Osaka Art Museum and the Pinto Art Museum collections. 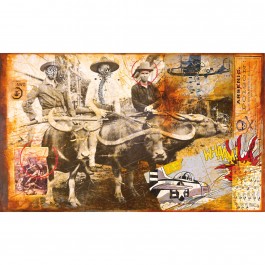 Descendants of Cain I 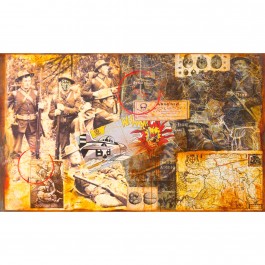 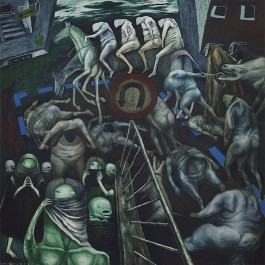 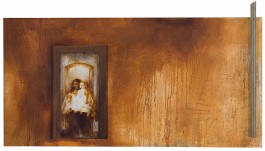 Republic of the Philippines